One Step at a Time

David Richardson smiles as he shows off a video of himself walking out of the University of Maryland Rehabilitation & Orthopaedic Institute last summer. Walking without assistance did not seem possible just two months prior after he was diagnosed with transverse myelitis, a neurological condition that causes inflammation of the spinal cord and interrupts the messages that the spinal cord nerves send throughout the body. As a result, David was temporarily paralyzed from the waist down.

The video captures an amazing scene: dozens of medical staff and onlookers applaud and cheer as David takes small, carefully calculated steps from the lobby and out the main doors of the hospital.

“Look how wobbly my legs are,” laughs David, who routinely cracks jokes about the illness that uprooted his life last April. Maintaining a sense of humor is important, he says, especially when going through a situation that is so scary and uncertain.

The quick thinking and advanced expertise of the medical teams at each UMMS affiliated hospital led David to a correct diagnosis and successful recovery. It also inspired David and his wife, Karen, to make a philanthropic gift to the wheelchair basketball clinical and spinal cord therapy gym at the University of Maryland Rehabilitation & Orthopaedic Institute, where David spent seven weeks as an inpatient. 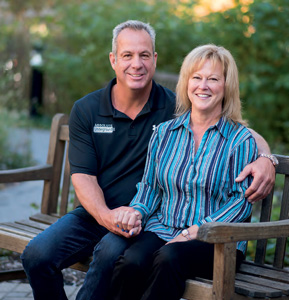 “We wanted to give back for everything the University of Maryland Medical System gave to us. Every staff member we encountered during David’s illness and recovery showed our family such respect and compassion. It is because of their advanced care that David has his life back,” Karen says. “Who’s to say how we would have ended up if we would have been anywhere else?”

Prior to his diagnosis, David was in the best shape of his life and worked out at the gym several days a week. But in early April, he felt as though he had sand in his shoes and within a few days, he could no longer move either leg.

David first sought treatment at the University of Maryland Baltimore Washington Medical Center, where his daughter is a nurse. The disease continued to creep up his body and at one point, David did not know if he would survive as he felt the paralysis begin to reach his chest. David’s doctors made the quick decision to transfer him to UMMC in Baltimore to access specialized experts in this area. It was there that David received a diagnosis of transverse myelitis.

“Transverse myelitis can be a devastating disease, and the outcome depends on starting an adequate treatment quickly followed by skilled and intensive rehabilitation,” explains Horea Rus, MD, PhD, who led the care team for David at UMMC. “In many cases, the cause is unknown.”

Dr. Rus ultimately treated David with intravenous immunoglobulin and within a short time, his symptoms began to recede. Once David’s condition improved, he arrived to the University of Maryland Rehabilitation & Orthopaedic Institute to begin the recovery process.

David’s daily routine included a trio of therapies: physical, occupational,and recreational. These involved learning new life skills, like moving himself from a bed into a wheelchair. He also attended support meetings where he could interact with other patients dealing with similar obstacles. Above all, David tried to keep busy, helping him to avoid negative thoughts and focus on the task at hand — healing.

“At the University of Maryland Rehabilitation & Orthopaedic Institute, we take a comprehensive, multidisciplinary approach to treatment, using a combination of therapies and support programs based on the patient’s unique needs and abilities,” explains Melita Theyagaraj, MD, one of David’s care providers. “In David’s case, we wanted him to stay active and encouraged him to get involved with many of the activities that we offer. David’s sense of determination, humor and upbeat attitude, along with the support of his family, also helped him in his recovery.”

During David’s seven weeks as an inpatient, Karen stayed by his side. The rehabilitation team recognizes the benefit that a strong support system has on a person’s recovery, and Karen’s presence helped David through his most difficult days.

“She made it so much easier because she was with me every night,” David says. “I’d tell her to go home and get some rest, and she’d say, ‘I want to stay here.’ She is my best friend.”

David and Karen remain extremely grateful for the outpouring of support they received from all sides — especially their son and daughter, who were a tremendous help during a very difficult and uncertain time for their family. And the couple will never forget the expertise and compassion of every University of Maryland Medical System staff member they encountered — from the doctors and nurses, to the maintenance team, to David’s wonderful inpatient therapists, including Jonathon Stacey, Christina Feldhaus, and Mike Henley. Their combined encouragement motivated David to work hard, regain his ability to walk, and walk unaccompanied out of the hospital on his release day.

“Every University of Maryland Medical System staff member cares, they really do. You aren’t just another number or another rotation,” Karen says. “And they provide state-of-the-art health care with such grace and heart.”

To make a gift in support of the University of Maryland Medical System, please click here.