Leading UMGCCC into a New Era 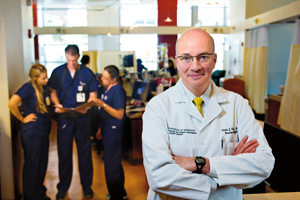 Responsible for nearly 1,600 deaths each day, cancer is second only to heart disease as a cause of death across the United States. It is estimated that more than 33,000 people in Maryland will be diagnosed with cancer in 2018.

Under the direction of Kevin Cullen, MD, the University of Maryland Marlene and Stewart Greenebaum Comprehensive Cancer Center has emerged as a renowned leader in cancer care, innovation, and discovery. In every one of his many pursuits, Dr. Cullen remains focused on his overarching goal: longer, healthier lives for all those suffering from cancer.

“That’s really what a cancer center is about — translating basic science results into better ways to treat patients,” says Dr. Cullen, who also serves as the Marlene and Stewart Greenebaum Professor of Oncology. “And it’s something we work hard to accomplish every day.”

Specializing in head and neck cancer, Dr. Cullen came to the University of Maryland Medical Center in 2004. Under his leadership, UMGCCC received the prestigious Cancer Center designation from the National Cancer Institute (NCI) in 2008. Eight years later, UMGCCC earned the NCI’s highest designation as a Comprehensive Cancer Center, recognizing its high caliber of scientific leadership and robust programs in basic, clinical, and population science research. It is a distinction that places UMGCCC in the top tier of cancer centers across the country.

During his tenure, Dr. Cullen has significantly expanded UMGCCC’s clinical and research programs — including the recent opening of the Fannie Angelos Cellular Therapeutics Laboratory, a state-of-the-art facility that enables scientists to create the next generation of cell therapies for advanced and resistant forms of leukemia and lymphoma.

Dr. Cullen has been acknowledged at the highest levels of national cancer leadership. In 2011, he was appointed by President Obama to a five-year term as a member of the National Cancer Advisory Board, an advisory committee to the National Cancer Institute. Since 2000, Dr. Cullen has volunteered with the American Cancer Society and has held leadership positions at every level, including service on the former South Atlantic Division Board. He currently is chair of the American Cancer Society Board of Directors.

The construction of a new building has long been Dr. Cullen’s vision to further advance UMGCCC. Now a reality thanks to a lead gift from Roslyn and Leonard Stoler, the remarkable new addition will further progress cancer research and ensure that all people with cancer are treated with the most patient-centered approach.

“Roz and Len Stoler are two of the most gracious, generous people I’ve ever had the pleasure of meeting,” says Dr. Cullen. “It’s very exciting to work together with them on this new phase of success for the cancer center.”