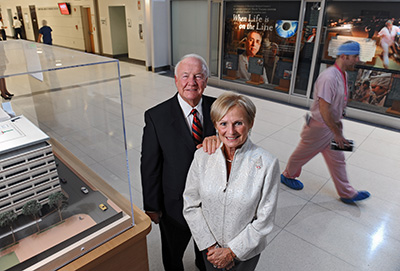 Reprinted with permission of The Baltimore Sun Media Group. All Rights Reserved.

An indispensable partner who worked tirelessly alongside Dr. Cowley to establish the Shock Trauma Center, Sen. Kelly has championed trauma care, research and training at UMMS for more than 35 years.

“I am honored to be a part of the Shock Trauma Center and to help protect this invaluable resource for the region, the country and the world,” he says. “When I ran for office in 1978, I promised my opponent and good friend, Dutch Ruppersberger [the current U.S. representative for Maryland’s 2nd Congressional District] that I would look out for UMMS’ shock trauma initiatives if I won. Dutch had become a strong shock trauma advocate after the UMMS team saved his life. So when I won the race and took office, one of the first people I met with was Dr. Cowley.”

Over the next four decades, Sen. Kelly would foster UMMS’ shock trauma efforts in innumerable ways, from introducing the bond bill to build the former shock trauma facility to chairing the capital campaign for the new Shock Trauma and Critical Care Tower. He received plenty of help from his wife, Janet: in addition to hosting dozens of events to benefit the center over the years, she was recently featured with Sen. Kelly in a supportive new video that plays for anxious loved ones in the tower’s waiting area.

“The video is meant to give hope to moms and dads, sisters and brothers, and anyone who has someone very sick in that operating room,” Mrs. Kelly says. “We want to give them words of encouragement and remind them that we save 97 percent of patients who come through our doors.