In celebration of her triumph over cancer, Marlene Greenebaum and her family give back to UMGCC 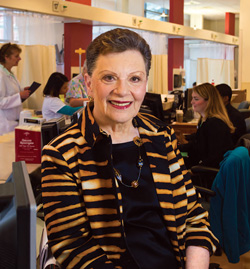 Marlene Greenebaum gives all new meaning to the term “survivor.” In August 2015, this incredible community leader and philanthropist commemorated the 25th anniversary of the day she learned she had breast cancer. Every day since has been filled with action and advocacy by Marlene and her family, including her husband and son, Stewart and Michael Greenebaum, as well as her daughter, Amy Burwen, and Amy’s husband, Steve. Together, the family continues to work tirelessly to bring about a better future for cancer patients around the world.

Among the Greenebaums’ foremost priorities—supporting cancer initiatives at the University of Maryland Medical Center (UMMC), where Marlene received cutting-edge treatment that helped her triumph over the disease. “I had absolutely wonderful care,” says Marlene, recalling her experience with the outstanding oncologists, nurses, and other support staff involved in her treatment. “Not only are they the best at what they do, but they’re also very compassionate, caring people.”

That experience led Stewart—a top Maryland real-estate developer who was then Chairman of the University of Maryland Medical System Board of Directors and a member of the University of Maryland School of Medicine Board of Advisors—to formulate a special plan for honoring both his beloved wife and the institution that saved her life. “In 1995, on the five-year anniversary of my diagnosis, Stewart said we should commemorate my recovery,” Marlene remembers. “I thought we would just go to dinner; I had no idea he’d reveal a plan to name the cancer center in my honor!” 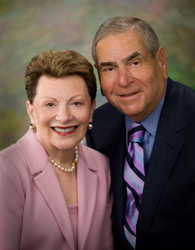 The University of Maryland Marlene and Stewart Greenebaum Cancer Center (UMGCC), named in recognition of the couple’s unprecedented gift to UMMS and the School of Medicine, was announced one year later. (Marlene and Stewart Greenebaum pictured to the right.) The gift enabled UMGCC’s renowned clinical, research, and training programs to reach the next level: UMGCC ultimately became one of only 68 centers in the country to receive the prestigious National Cancer Institute designation, and it is consistently ranked among the nation’s top 50 cancer hospitals by U.S. News & World Report.

The transformative gift is just one in a long line of the family’s efforts to improve the lives of cancer patients throughout Baltimore and well beyond. Those efforts include serving on the UMGCC Board of Advisors, where both Greenebaums contributed the wealth of expertise they had gained as board members of various businesses and charities. Stewart became a particularly well-informed advocate for cancer causes: “After I was diagnosed with breast cancer, Stewart researched it from top to bottom,” notes Marlene. “One doctor said he’d never seen a lay person who was so knowledgeable on the subject.”

The Greenebaums’ son, Michael, also became an avid volunteer—joining the Boards of Advisors of both UMGCC and School of Medicine, and working with his friend and running partner, Jon Sevel, to establish the annual Maryland Half Marathon & 5K benefitting UMGCC. In its seven-year existence, the event has grown to 2,000 participants each year, who have raised nearly $2 million to date in support of UMGCC programs.

In addition to their volunteerism, the Greenebaums have continued to make major philanthropic investments in UMGCC, including their gift of the Marlene and Stewart Greenebaum Distinguished Professorship in Oncology, held by UMGCC Director Kevin J. Cullen, MD. The couple’s collective contributions have allowed Dr. Cullen and others to make unparalleled progress in the understanding and treatment of cancer among all populations. For instance, Dr. Cullen has demonstrated for the first time that survival disparities in head and neck cancer are largely explained by previously unknown differences between racial and ethnic groups in the rate of human papillomavirus (HPV) infection. “I’m so proud to support work that is leading to better care for those with cancer—especially the underserved,” says Marlene.

The family’s profound generosity extends to other programs as well, from their support for School of Medicine scholarships to their latest special gift: the Stewart J. Greenebaum Endowed Professorship in Stroke Neurology, given by Marlene following her husband’s tragic stroke three years ago. “After Stewart’s amazing gesture to name the cancer center in my honor, this professorship was my gift to him.”

Going forward, Marlene intends to continue the work to end cancer that she and her family began more than two decades ago. “When I was growing up, if people had the ‘Big C,’ they didn’t talk about it,” notes Marlene. “I’m extremely gratified to know that in sharing my story and publicly pledging my support for cancer causes, I have had a role in changing that—and in making life a little brighter for all those with this disease.”

To make a gift in support of the Greenebaum Cancer Center, please click here.