The Power of Relationships

After 20 years, Bobby Ginsberg’s partnership with the University of Maryland Marlene and Stewart Greenebaum Comprehensive Cancer continues to evolve 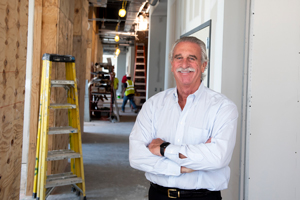 For S. Robert “Bobby” Ginsberg, it’s always been about relationships.

Over the years, his connections with people have led to many great successes. Bobby is a devoted husband, father, and grandfather; he is the founder and Chief Executive Officer of Chesapeake Contracting Group, an established general contracting business in the Mid Atlantic; and he is extremely charitable, especially to the University of Maryland Marlene and Stewart Greenebaum Comprehensive Cancer Center.

As an active member of the UMGCCC Board of Advisors and chairman of its biennial golf tournament, Bobby has raised significant funds and donated much of his time to the cancer center over the years. This year’s golf tournament alone raised more than $550,000.

“Building and maintaining relationships with people is everything,” Bobby says. “It is important in every area of a person’s life — both personally and professionally. It is through these relationships that doors open and new opportunities develop.”

Born and raised in Baltimore, Bobby had an early interest in construction and got his first professional glimpse during a summer job in college. He left shortly thereafter to enlist in the Air Force Reserve, where he served six months on active duty in the medical unit.

Two years later, Bobby moved on again — this time to finish his degree at the University of Maryland. After graduation, he began working with a former work colleague at a startup construction company.

“At this job, I literally did everything from digging ditches in the morning to writing payroll, paying bills, and estimating the next job in the afternoon,” Bobby recalls. “My days were long, but evidently I must have loved it.”

Six years later in 1979, Bobby founded Chesapeake Construction Company, known today as Chesapeake Contracting Group (CCG). In the company’s first year, Bobby was the only employee. While he found success working on small projects, he wanted the opportunity to build something bigger.

“I had an approach from the very beginning that I wasn’t going to fail,” Bobby says. “I would do whatever it takes to succeed.”

Through a connection at his former workplace, Bobby was recommended as the project manager for the Hunt Valley Mall project in 1981. It would be the first of many large-scale projects throughout the Mid-Atlantic region, including the demolition and revitalization of that same mall almost 20 years later.

Giving Back to the Community

In the 1990s, as his company continued to grow, Bobby wanted to give back to the community and make a difference in people’s lives.

Bobby reached out to his work colleague and friend, Stewart Greenebaum, a local real estate developer and philanthropist who would later name UMGCCC. Stewart scheduled a tour for Bobby of the University of Maryland Medical Center (UMMC) led by Dr. Mohan Suntha, who now is its president and chief executive officer.

As Bobby walked through UMMC and its cancer center, he was inspired by Dr. Suntha and the cutting-edge research in the lab, the patient-focused treatment environment, and the expertise and compassion of the faculty and staff. He knew right away he wanted to be involved with the cancer center and build on its success.

“Everybody is affected by cancer. You can’t find a family that it hasn’t touched,” Bobby says. “I’ve had cancer in my family, and I’d love to see the disease erased. But it seems that the major challenge with cancer is that it keeps changing, which is why investing in cancer research, innovative technology, and patient care continues to be so important to me.”

For more than 20 years, Bobby has devoted a significant amount of his time and resources to UMGCCC. Through his relationships in the community, Bobby has recruited new event partners, donors, and sponsors who share his passion for the institution.

“In my company, we are relationship driven and have a sense of loyalty to everyone we encounter — from the client to our CCG team to our subcontractors,” he explains. “When I develop a relationship, I stand behind it and stay with it. This same mindset applies to my commitment to the hospital.”

In 2014, Bobby stepped up as chairman of UMGCCC’s charity golf tournament with two goals in mind: to raise money for the cancer center and to bring awareness to the remarkable advancements and amazing work that is being done every day. Under his leadership, the golf tournament has raised $1.5 million since 2014.

“The money that we raise from the golf tournament all goes directly to the hospital,” Bobby says. “While philanthropy is extremely important, it is just as important to raise public awareness of the cancer center. Many people do not realize all of the wonderful discoveries and amazing breakthroughs in cancer that have happened here. It is my ongoing purpose to ensure that the faculty and staff of the cancer center have the tools they need to continue to advance their research and make new discoveries that will save more lives.”

To make a gift in support of the University of Maryland Greenebaum Comprehensive Cancer Center, please click here.