After unexpectedly losing her husband, Diane Boragno and her family continue to honor him through giving to the R Adams Cowley Shock Trauma Center 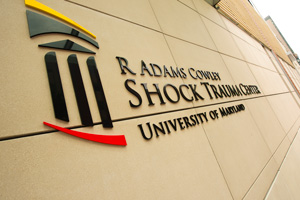 Nearly 13 years have passed since Diane Boragno’s husband, Jim, fell from the roof of their home in North Potomac, Md. Paramedics came quickly to the scene and within 20 minutes, Jim arrived at the University of Maryland R Adams Cowley Shock Trauma Center via medevac for treatment.

Jim spent the next nine days in Shock Trauma, where he underwent surgery and various tests. Each day posed new difficulties and uncertainties about his outcome. Through it all, Diane stayed by his side, living at the University of Maryland Medical Center.

As she reflects on those distressing days, Diane remembers the incredible amount of professionalism, support and compassion shown by the doctors, nurses, technicians and staff. Every person she met at the University of Maryland left such an impression on her that she still feels their sincerity all of these years later.

It was their sympathetic attitude that helped to calm and comfort her during one of the most difficult times of her life — from the instant her husband arrived at Shock Trauma to the moment he was removed from life support.

“Shock Trauma is probably one of the most incredible places I have ever been to. I was always in the loop. I never felt like the doctors and nurses weren’t telling me something. They were always so up front and so gentle,” Diane explains. “Being in Shock Trauma, gave me a sense of peace that is very hard to describe to anyone unless you are in that kind of traumatic situation. I just have forever been grateful for those nine days.”

Soon after Jim passed away, Diane and her family wanted to honor his legacy. Throughout the hallways of Shock Trauma and the University of Maryland Medical Center, Diane remembered seeing a number of plaques with family names hanging on walls. Because of the compassionate care she and her husband received, Diane chose to make a planned gift to Shock Trauma through a charitable remainder unitrust.

“Jim is the one who taught me about giving, so he would be proud of me,” Diane says. “He’s the one who always made sure we shared what we have.”

In 2005 when Diane made this planned gift, the area around the medical center’s food court was undergoing a renovation. Both Diane and Jim’s careers were in the food industry, which is why Diane decided to name the area in Jim’s honor. On the first floor of the south building, a sign honoring Jim hangs on the wall, with a quote that reads, “Put your family first— always.”

Establishing a planned gift and becoming a Life Partner of Shock Trauma was not something that Diane and Jim had planned to do before the accident. But after going through this experience, Diane wanted to support the organization that worked so hard to save her husband’s life.

“In my heart, Shock Trauma changed my life forever with this accident,” says Diane, who in spite of her tragic loss, recognizes Shock Trauma’s important role in conducting groundbreaking research and advancing patient care. “When you see Dr. Scalea and so many of the same doctors and nurses still there — innovating, building and improving — I want to continue to be a part of that.”

To make a gift in support of the Shock Trauma Center, please click here.