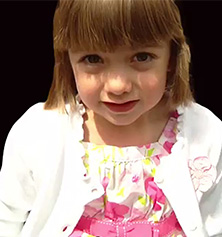 By the time Grace Rice was 2, she had surpassed her life expectancy by a year, but no one knew it – not even her parents, both of whom are physicians.

A faint heart murmur picked up during a routine exam ultimately brought Grace to the University of Maryland Children’s Hospital where an ultrasound revealed a shocker: Grace had heart failure and needed surgery – as soon as possible.

Heart failure in children usually shows up early as a lack of endurance, but Grace had been keeping up with her playmates, so her condition went undetected until the murmur led to further testing. The Children’s Heart Program team later determined that Grace had developed additional blood vessels to partially compensate for the abnormality.

As soon as Grace was diagnosed, Sunjay Kaushal, MD, PhD, director of pediatric cardiac surgery, performed a routine surgery to restore Grace’s normal blood flow. In the procedure, Dr. Kaushal detached Grace’s left coronary artery from the pulmonary artery and attached it to her aorta, restoring normal anatomy and blood flow to her heart tissue.

Four years later, Grace, 6, is a bubbly, energetic child who trudges up hills, runs, jumps and kicks with ease as she keeps up with her older brother, Zachary.