Pascal's gift to UMMC could affect anyone who undergoes joint replacement 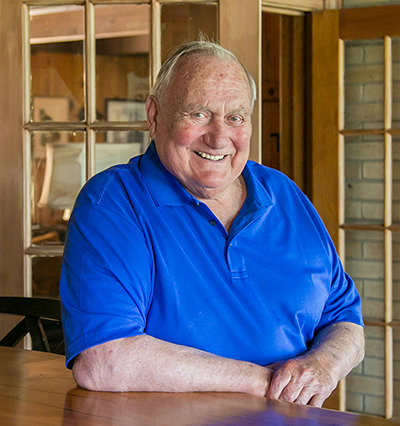 Robert “Bob” Pascal has made a life-long habit of giving back to the people and places that help him thrive, ensuring others have a chance to flourish as well. True to form, Mr. Pascal recently made a gift of $1 million to University of Maryland Medical Center after receiving expert care from orthopaedic surgeon Theodore “Ted” Manson, MD. The gift is allowing Dr. Manson to speed his pioneering research on orthopaedic implants from the bench to the bedsides of patients across the country.

Mr. Pascal’s investment in UMMC follows decades of broad support for the communities that have sustained him. From his childhood home in an apartment above a bakery, he worked hard to become a star student and athlete –-ultimately earning a spot on Duke University’s Blue Devils football team, where he was named first team All-American and Most Valuable Player. After eventually buying United Propane and building it into one of the top 25 companies in the nation, Mr. Pascal gave a lead gift to Duke for its new 80,000-square-foot Pascal Field House, which helps next-generation football players develop their skills.

He also became a public servant, spending four years as a Maryland state senator, seven years as county executive of Anne Arundel County, and six as secretary of appointments to Gov. William Schaefer. Now retired from official public service, Mr. Pascal continues to serve his community through other means, such as his wide-scale restoration of the 950-acre Jean Ellen duPont Shehan wildlife sanctuary, which he acquired from the National Audubon Society in July 2010. He’s vowed not to develop any of this unspoiled land, and his restoration efforts have included revitalizing a waterfront house on the property that serves as a retreat for wounded veterans.

“Bob Pascal is just a terrific guy,” says Dr. Manson, who performed Mr. Pascal’s knee replacement surgery last year. “He’s the kind of person you look forward to talking to when you see him on the clinic schedule.”

These days, Mr. Pascal appears on the schedule less and less after his highly successful surgery. “When I asked around about the best orthopaedic surgeons, Ted Manson’s name was mentioned often,” recalls Mr. Pascal. “I was extremely impressed with the way he handled my case. My knee feels great; that’s the bottom line. It got well, and it got well quickly.”

With his contribution to Dr. Manson’s work, Mr. Pascal will be helping others get well far into the future. Partnering with colleagues across the university—including Robert O’Toole, MD, Mark Shirtliff, PhD, Bruce Gilliam, MD, Kalpana Shere-Wolf, MD, and Emily Heil, PharmD —Dr. Manson is pioneering studies on the prevention and treatment of infection in orthopaedic implants. Through innovative techniques such as placing precisely the right amount of antibiotics around implants at the time of surgery and administering antibiotics directly into implants that have already become infected, Dr. Manson is changing the landscape for the more than 800,000 Americans receiving joint replacements each year.

“There can’t be a better place to invest than UMMC,” Mr. Pascal says. “This funding will go directly toward solving a critical problem, and I think the results are going to be really fantastic. Dr. Manson will take this gift and run with it.”

“We’re using Mr. Pascal’s gift to translate our smaller-scale basic science project into a large-scale effort and to launch a nationwide clinical trial,” Dr. Manson explains. “With all of today’s restrictions on government and industry funding, it’s very difficult to secure support for these types of projects. It’s only through people like Mr. Pascal that we’re able to do this.

“With this one gift, Bob is going to end up helping quite a few people.”

Learn more about ways you can help support UMMC.