Father and son aid UMMC across the board 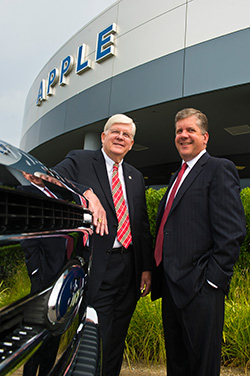 Dedication runs in the family of George Doetsch, Jr. After founding Apple Ford Lincoln in 1986 and working for decades to build the nationally recognized dealership, George finally passed the presidential torch to his son, George “Chip” III, who is now leading this booming business into the future. Both men have applied the same steadfast commitment as well as their business acumen to their various volunteer and charitable efforts in support of the University of Maryland Medical Center.

The Doetsches’ dedication to UMMC began more than 20 years ago, when George joined the R Adams Cowley Shock Trauma Center Board of Visitors—and he remains a member today. He also initiated his dealership’s “Drive to Survive” event, a fundraiser for the Shock Trauma Center. “We attribute our success to our community,” says George, “and, in turn, we use the fruits of that success to help meet the needs of the people we serve.”

George’s strong confidence in the center was especially reassuring when he became a patient himself. “The treatment I received as a Shock Trauma Center patient was just unbelievable,” George recalls. “I made it back to nearly perfect health when a lot of people didn't think I ever would.”

“Had my dad been somewhere else, he probably wouldn't be alive,” says Chip. “When you see that kind of quality—of the staff, the capabilities, the process—you want to support it.”

In seeking his own supportive niche at UMMC, Chip joined the Children’s Hospital Board of Visitors. As Board Chair, he has been instrumental in advancing key initiatives, such as the campaign to renovate the neonatal intensive care unit (NICU).

“The NICU vision is not only to individualize the rooms where the babies and their families will be, but also to support the staff in giving them the space and resources they need to provide the best possible care,” Chip says. “The new facility will help the Children’s Hospital team attract even more top talent, and it will certainly draw more young patients to UMMC from across the whole spoke-and-hub University of Maryland Medical System.”

Chip knows that contributors to the campaign will feel proud about their choice: both he and George have been deeply moved after seeing the impact of their personal contributions to previous UMMC capital projects. “Nobody has to say a word,” notes Chip. “You can just walk into a space you’ve helped renovate, observe the change, and feel great knowing you’ve helped families you’ll never meet.”