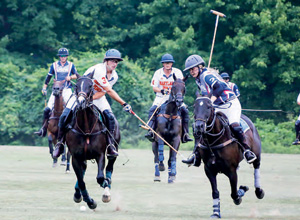 "It began as a luncheon for close family and friends on a steaming hot summer afternoon,” says Ron Maher Jr., recalling the first year of what would become the Ronny Maher Memorial Polo Match benefitting the R Adams Cowley Shock Trauma Center. “We served simple chicken salad on paper plates yet still had about 50 guests, which was pretty remarkable. So we thought, ‘why not do this for charity?’”

Ron and his cousin, Mary Bee, initially conceived of the polo match as a way to honor Ron’s father, Ronny Sr., who passed away in 1997. Since then, the Ronny Maher Memorial Polo Match has raised hundreds of thousands of dollars for Shock Trauma at the University of Maryland Medical Center.

The Maher family chose Shock Trauma as the event beneficiary based on the outstanding care Ronny Sr. received following a traumatic fall, which tragically proved fatal. Twenty years later, the Maher family and their friends remain extraordinarily grateful to Shock Trauma for their expert treatment of Ronny and their compassion to all of his loved ones throughout his illness.

“It’s a phenomenal institution,” Ron says. “It’s more than bricks and mortar — it’s the spirit and the dedication of people who work there.”

This past July, Ron hosted the 20th polo match with more than 600 people in attendance. The afternoon match was followed by a catered dinner, live band, dancing, and silent auction.

Looking back over the last two decades, Ron is amazed by how the benefit has grown over the years. He couldn’t be more pleased that his effort to honor his father now brings hundreds of people together each year, offering a wonderful opportunity to socialize with friends, commemorate Ronny Sr.’s life, and raise funds for Shock Trauma.

“It’s a fun event that benefits an important cause and brings people together every summer,” he says. “It’s become a tradition now.”