A patient and her caregiver complete the Maryland Half Marathon and raise more than $10,000 for UMGCCC 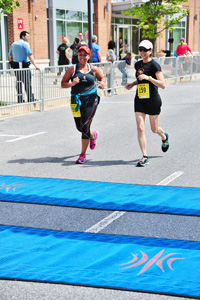 When faced with a challenge, Dana Deighton does not shy away—she confronts it head on. At 43-years-old with three young children, Dana received a stage-4 esophageal cancer diagnosis about three years ago. Describing the finding as “unfathomable,” Dana traveled the East Coast looking for a treatment plan that gave her the best chance of survival.

Unfortunately, several physicians at area hospitals closed the proverbial door on anything other than palliative chemotherapy; a treatment designed to prolong survival and ease symptoms, but not eradicate the disease.

Those diagnosed with esophageal cancer are commonly older men with unhealthy habits, such as smoking. As a younger woman with a healthy lifestyle, Dana fell outside the demographics of a typical patient. Since research on cases like Dana’s was sparse, physicians placed her in the same category as every other esophageal cancer patient. “That’s what really got to me,” Dana explains. “I was otherwise healthy, could run circles around those doctors and was unwilling to be part of a bucket I did not belong in.”

Dr. Suntha called Dana right away to discuss her case. “He spent more time on that initial call than any doctor had given me in their exam room,” Dana comments. Dr. Suntha gave Dana a new treatment regimen and kept alternative options on the table, an important consideration that other medical institutions dismissed.

“Dr. Suntha didn’t waste any time, which I love,” Dana says. “Every day, every minute counts when you are in this situation. You lose nights and nights of sleep over this. My response to chemo was what some physicians thought was unexpectedly favorable, but I knew we had to find longer-term treatment options to keep winning. It’s all a race and I knew we had to stay ahead of it or the anxiety would certainly kill me before the cancer did.”

While Dana experienced unsuccessful procedures and setbacks with some treatments, she trusted Dr. Suntha and felt comfortable in his care. “Dr. Suntha was laser focused, put up with my excessive questions and Friday night panic calls, and always had an arsenal of answers, clinical tools and compassion,” Dana says.

At the same time that Dana met Dr. Suntha, she also met Tiffani Tyer, a nurse practitioner in the Radiation Oncology department. The two women immediately connected. “She just shined through during a very grey period and seemed like somebody who was really going to listen and take care of me. And she has, everyday,” Dana says. Overtime, Dana and Tiffani learned more about each other, regularly discussing their families, jobs and hobbies particularly their passion for running.

For the past several years, Tiffani participated in the Maryland Half Marathon and 5K, an annual event that benefits UMGCCC. “Dana was really interested in the event and supported me on my event page with a donation,” Tiffani recalls. “At the time, she was just recovering from surgery and said, ‘I would love to do that race with you if I am well and able to next year.’ So we set it as a goal.”

That fall, Dana told Tiffani she felt strong enough to run the half marathon. Over the next several months, the two women trained for the race. While mostly running independently, they shared their training experience with one another when Dana came into the hospital for treatment. “We provided accountability for each other,” Dana explains. “Sometimes I would say that I had a slow run, and sometimes hers weren’t the best either, but we got them done. She really pulled me through in every way.”

Along with the training runs, Dana and Tiffani also fundraised for UMGCCC and started “Team Rad. Onc.” Setting a goal of $5,000 and thinking it was a stretch, Dana and Tiffani felt overwhelmed when they surpassed it and raised more than $10,000 for the cancer center. “When people know you are doing something genuinely and for a cause that really matters, they want to be a part of it too,” Dana says. “Friends and family as well as people who had no relationship with us came out of the woodwork and made a donation. People with a similar experience as me understand the value of their contribution to a place that makes a big difference.”

Dana and Tiffani not only met their fundraising goal, but they met their running goal as well. On May 14, they completed the 13.1-mile run and crossed the finish line together —a moment they both will not soon forget. “We literally talked the entire 13 miles about everything from her kids and job to my kids and interests,” Tiffani says. “We also spoke about how she can help other patients in a similar circumstance.”

Three years since her original diagnosis, Dana still fights the cancer battle. Every two weeks at UMGCCC, Dana undergoes immunotherapy, which harnesses the power of a patient’s immune system to fight the cancer. She is grateful to Dr. Suntha, Tiffani and all of the UMGCCC medical personnel, including Dr. Whitney Burrow’s and Dr. Dan Zandberg’s teams, who have helped and continue to help her through this extremely difficult time in her life. “It honestly has taken an army to keep me alive,” Dana says, “and I’m grateful every day for the tight net they’ve all woven to support me.”

Dana’s diagnosis is serious, Tiffani acknowledges, but through it all, she continues to persevere and live for the moment. Dana also stays engaged in the latest science related to new cancer treatments and many times, forwards Tiffani an article about it. “Dana knows how significant her diagnosis is, but she never stops asking questions about what she can do to help herself,” Tiffani says. “The most impressive thing about her is that she continues to advocate for herself. Even if it is scary, she asks the questions that you may not want to know the answers to.”

For now, Dana and Tiffani are looking ahead and already talking about their next race. They may do the Philadelphia Half Marathon in November and would love to run the Maryland Half Marathon again next May.

While the road ahead may be uncertain, their bond is undeniable. Whether training for a half marathon or continuing the fight against cancer, Dana and Tiffani take each day one step at a time.

To support the work of UMGCCC, please click here.