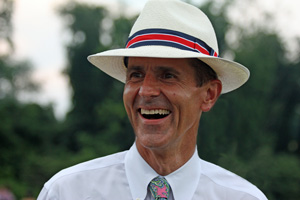 For nearly two decades, Ron Maher Jr. has organized the Ronny Maher Memorial Polo Match to benefit the R Adams Cowley Shock Trauma Center. The annual event remembers Ron Jr.’s father, Ronny, who was severely injured in a horse riding accident in 1996 and flown to the Shock Trauma Center. Sadly, he succumbed to his injuries in 1997. The Maher family and friends remain steadfast supporters of Shock Trauma in recognition of the extraordinary care he received.

The 19th Annual Ronny Maher Memorial Polo Match will be held on Friday, July 22 at the Maryland Polo Club’s Ladew Field in Fallston, Maryland. We spoke to Ron Jr. about his experience with the Shock Trauma Center and why he keeps the Polo Match going after all of these years.

What inspired you to organize the Polo Match?

The year that my father died, my cousin, Mary Bee, and I decided to host a family gathering and have a polo match in his memory. It began as a luncheon on a steaming hot afternoon. We ate lukewarm chicken salad on paper plates and had about 50 people in attendance, which was pretty remarkable. We thought, ‘why not do this for charity?’

From there, the event grew tremendously. We moved it to a Friday night with dinner and a band. We started a silent auction and this year, we have a variety of items ranging from a chainsaw to a ski package to an African safari. We’re even going to have a horse drawn carriage parade during the event.

The polo match went from 50 family members and friends to 500 of my closest acquaintances. It is a really fun party and not stuffy or dressy. It costs $65 per person ($85 after July 1) and that gets you dinner, beer and wine, and live music. Thanks to our attendees and sponsors, we’ve raised over $800,000 for the Shock Trauma Center since we started this event.

What do you hope to achieve with the annual Polo Match?

I hope to continue to bring awareness and raise money for Shock Trauma. I want to inform people that Shock Trauma does much more than what you see on the local news.

When people think about Shock Trauma, they think of a car accident or gunshot wound. While they certainly care for victims of vehicle collisions and violence, not many people are aware that they also educate and train our nation’s armed forces on treating traumatic injuries. You also don’t hear about the hyperbaric chamber, which helps people with carbon monoxide poisoning, gas/air embolism and decompression illness, to name a few.

The point is that there are so many injuries or illnesses that can put a person’s life in jeopardy and Shock Trauma is prepared to handle any scenario.

Why do you continue to support the R Adams Cowley Shock Trauma Center?

It’s a phenomenal institution. It’s more than a bricks and mortar. It’s the spirit and the dedicated people who work there. Earlier this spring, I attended a reception at Shock Trauma and was told that a nurse wanted to meet me. She had treated my father. Relative to the time that has gone by, my father was not in her care all that long. But that’s the kind of people who work at Shock Trauma. They care and they remember.