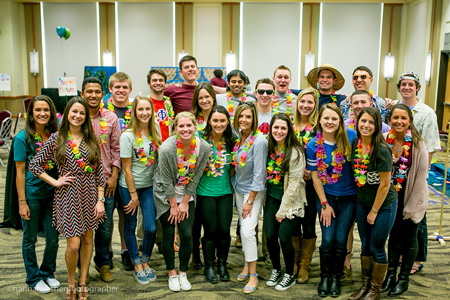 Pictured above is Sigma Phi Epsilon and Kappa Alpha Theta with Dr. Brenda Hussey-Gardner at the 2015 NICU Reunion.

The University of Maryland Children’s Hospital Neonatal Intensive Care Unit (NICU) Reunion began as an event for former NICU patients and their families to come together to celebrate how far they have come, as well as, provide an opportunity to thank the caregivers they met during their stay. The reunions have now turned into a highly anticipated event every other year for these small patients and their families. And assisting in making these special reunions happen are the brothers of Sigma Phi Epsilon, Maryland Beta Chapter, at the University of Maryland College Park.

March 29, 2015 marks the fourth NICU Reunion for Sigma Phi Epsilon. The origins of Sigma’s involvement trace back to a family pizza night at the home of Brenda Hussy-Gardner, PhD, MPH, associate professor of pediatrics at the University of Maryland School of Medicine. In her role at the University of Maryland Children’s Hospital (UMCH) as the NICU Follow-Up Clinic director, Dr. Hussey-Gardner leads all of the reunion events. Over dinner, Dr. Hussey-Gardner was sharing her thoughts with her family about an upcoming NICU Reunion and lamented to her son that it would be great if fraternities engaged in the same level of volunteerism and philanthropic causes as many sororities do. At the time, her son, Austin, was president of the Maryland Beta Chapter of Sigma Phi Epsilon. Austin’s response to his mother - “Well, why can’t we?” - officially launched Sigma’s continuing partnership with the NICU Reunions. 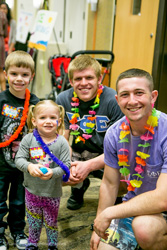 In the beginning, the NICU Reunion was primarily seen as a gratifying volunteer opportunity for the brothers of Sigma, but thankfully, has turned into so much more. In 2013, UMCH formally announced a campaign for a new NICU to provide a renovated and expanded NICU space in the hospital.

Around that same time, several of the Sigma brothers, including junior Christopher Frye, came to UMCH for a tour of the NICU. After seeing firsthand the space constraints of the current NICU and learning more about the new project plans, Christopher decided that Sigma could do more. He wanted to turn their volunteer opportunity into a philanthropic opportunity. “Seeing these sick babies and then seeing these healthy kids at the NICU Reunions was what sparked our desire to do more,” said Christopher. So in 2013, Sigma Phi Epilson pledged $25,000 to support the new NICU.

Christopher Frye is now Philanthropy Chair for Sigma Phi Epsilon and has embraced this role as philanthropist and fraternity brother in support of the NICU Campaign. Not only is Sigma helping to plan, organize and execute the 2015 NICU Reunion, they have also organized and designated several other fundraising events to benefit the NICU. To date, the eclectic mix of events has included an annual Powder Puff game and a unique “Car Smash.”

The brothers of Sigma Phi Epsilon are proud to continue and expand their partnership with UMCH’s NICU that Austin spearheaded in 2009. Adds Dr. Hussey-Gardner, “It’s amazing to have 80 guys in a room listening to you talk about babies. Sigma Phi Epsilon has been a wonderful partner and we are grateful for their generosity.”

What makes Sigma such a unique story beyond fraternity brothers helping Maryland’s tiniest babies is their decision to develop a one-on-one partnership with a local cause. In doing so, they have demonstrated a deeper level of engagement than is typically associated with greek life philanthropy. The brothers of Sigma Phi Epsilon have truly found their niche, and because of that, their involvement with the NICU has flourished into more than anyone imagined.

Learn more about the campaign for the new NICU.