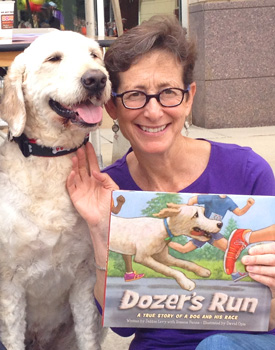 As a lawyer turned award-winning full-time author, Debbie Levy draws inspiration from many sources. Her bibliography is diverse, ranging from children’s books to texts on medical ethics and civil liberties, and her works are both lighthearted and deeply personal. Several of her projects also reflect Debbie’s passion for storytelling and philanthropy. By what can only be called serendipity, a recent project also strengthened her connection to the University of Maryland Greenebaum Cancer Center.

Long familiar with UMGCC through the work of her husband, Richard Hoffman, on the UMMS Board, and as a former patient herself, Debbie was acutely aware of its outstanding reputation. However, it was a twist of fate that sparked a renewed connection when Debbie’s agent called with a children’s book idea about a marathon-running dog.

Unbeknownst to Debbie, this dog named Dozer had recently received national attention for jumping in with runners of the 2011 Maryland Half Marathon and completing nearly seven miles of the race course. After she realized this race occurred right here in Maryland and was also a fundraiser for UMGCC, Debbie told her agent, “if someone is going to write that book it should be me!”

Dozer’s Run: A True Story of a Dog and His Race was published in 2014. In addition to the joy she has found sharing Dozer’s story with readers, Debbie notes another discovery. “Dozer’s appeal is universal. He brought joy to others who were racing to support UMGCC through his cheerful personality. He’s inspired many to give back and continue the fight against cancer.”

Through her work on Dozer’s story, Debbie deepened her own connection with UMGCC. Also a lifelong Marylander, Debbie believes strongly that “we’re fortunate to have an NCI-designated cancer center like UMGCC right here in our backyard so we all can benefit from the discoveries made here.” The people at UMGCC “wear their commitment to research and patient care on their sleeves,” she adds. “I knew I wanted to support these efforts.”

Levy’s philanthropic gift to UMGCC was inspired by her mother, Jutta Salzberg, whose personal story moved her daughter to pen The Year of Goodbyes: A True Story of Friendship, Family and Farewells. The book paints a portrait of Jutta’s life as a young girl in 1938 Nazi Germany.

Throughout the book, Jutta’s poesiealbum, or autograph book, features prominently and gives the reader a glimpse into everyday life. Prior to Jutta’s death at age 87 in 2013, Levy spent several years alongside her mother, sharing the book with others. “My mother was also a cancer survivor,” Levy notes. “I couldn’t think of a better way to pay tribute to her than to support cancer research. It’s what she would have wanted.”

Learn more about ways to make strides in cancer research.