The Power of Unrestricted Giving

The Kleiman family’s gift to the Department of Otorhinolaryngology-Head and Neck Surgery helped renovate space and expand patient care capacity. 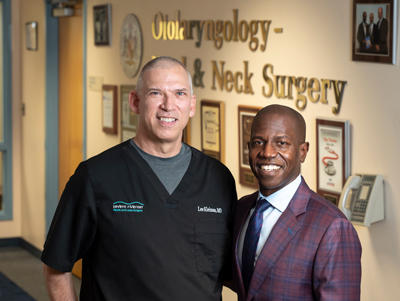 The University of Maryland Department of Otorhinolaryngology-Head and Neck Surgery recently completed a major renovation of its clinical space that goes well beyond the bricks and mortar. This incredible transformation more than doubled the number of patient rooms, added workstations and waiting room space, and enabled the recruitment of four additional faculty members—and it was all made possible thanks to philanthropy.

Lee Kleiman, MD, FACS and his family made the significant commitment as an unrestricted gift, allowing the funds to be used at the discretion of Rodney J. Taylor, MD, MPH, professor and chair of the University of Maryland Department of Otorhinolaryngology—Head & Neck Surgery. At the time, plans were underway for the renovations, but stalled due to the pandemic and unforeseen budget constraints.

“The generous gift from the Kleiman family helped to realize the project to its finale,” Dr. Taylor explains. “Their gift was timely and super helpful. It allowed us to achieve our dream to increase and update our clinical space. We’re going to be able to touch more lives by way of their generosity.”

Dr. Kleiman, a well-known facial plastic surgeon in Annapolis, is also an alumnus of the University of Maryland School of Medicine where he trained in Otorhinolaryngology-Head and Neck Surgery. He has stayed closely involved with his alma mater, both in a clinical sense and as a former trainee. Dr. Kleiman works in partnership with Dr. Taylor and his team to treat patients with a spectrum of complex ear, nose, and throat disorders; he also regularly attends events, lectures, and graduations on campus.

“It is a statement that Lee has maintained his connection and contact to our program,” Dr. Taylor says. “It symbolizes his appreciation and loyalty to a program that permitted him to practice medicine in the high quality and excellent way he has for many years. I interpret that as an important message about the quality of the training and his loyalty to the University of Maryland Department of Otorhinolaryngology-Head and Neck Surgery.”

Following graduation from the University of Maryland School of Medicine in 1986, Dr. Kleiman took his studies abroad and completed facial plastic fellowships in Canada and Switzerland. He eventually returned to Maryland, establishing a private practice and a home with his wife and their three children.

His affection for the University of Maryland Medical Center and School of Medicine stems from his respect for the institutions’ ability to not only train distinguished physicians, but also practice as top clinicians and scientists—a commitment that ultimately leads to better outcomes for patients.

“The University of Maryland has really grown with their research and has become one of the top institutions in the country for research development. I think that translates to better doctors and better care for our people,” explains Dr. Kleiman.

The University of Maryland Department of Otorhinolaryngology-Head and Neck Surgery is nationally recognized for its excellence in the comprehensive treatment and management of ear, nose, and throat disorders. The department sees adults and children for a range of disorders including allergy and sinus conditions, facial plastic cosmetic and reconstructive deficits, and complex tumors of the mouth, throat, thyroid, salivary glands, and skull base.

Over the years, Dr. Kleiman has been privileged to work with Dr. Taylor, as well as several of his predecessors, including Bert O’Malley, MD, who once served as the department’s chief and is now the president and CEO of the University of Maryland Medical Center. Dr. Kleiman’s esteem for the department’s leadership and respect for the program inspired his family’s generous gift.

“My parents were there to support me in my aspirations and I am very appreciative of that,” says Dr. Kleiman. “They also always gave to their community, whether it was to their synagogue or to a charitable organization. They set that precedent for me.”

Dr. Kleiman hopes his family’s gift aids in the continued growth and success of the department. He also hopes it inspires other alums to give back. The institution remains a major part of his life. It not only set him on a successful career path, but it is where he met his wife—on the first day of medical school. One of their daughters also attended the University of Maryland School of Medicine and is now an ER physician in the Annapolis area.

“The University has been a blessing for us and set me on a path that I’ve been grateful for. I think that alumni should think seriously about giving back to this institution, which did so much for them and allowed them to have a fruitful life. Anything that I can do to help strengthen the department, I am willing to do that—and I hope others do as well.”